This article covers my initial reaction to Windows 10 after using it on my main computer for a few days.

Windows 10 has been released (finally) after a long wait. I have been using Windows 10 for a fair bit of time during its preview state, however my usage of it was always limited to an old laptop - not my primary gaming rig / development machine.

With the release of Windows 10, I immediately installed it on my most important computer. This article covers my initial thoughts and reactions and my experience during the upgrade process.

Fair to say I was actually counting down the days until the 29th of July, a bit sad maybe but nevertheless the day I was patiently waiting for came and I was able to upgrade my main computer to Windows 10.

The upgrade process was not as smooth as I had hoped and expected, although having "reserved" (lol) my copy of Windows 10 a while ago it seemed that it was going to take quite a long time to download. After reading around the web I learned that you can actually manually kick the updater into download mode by typing wuauclt.exe /updatenow into an elevated command prompt, so I did and waited again for the download to progress.

Unfortunately for me, every time it prepared to install the update using the "Windows Update" application it failed for an obscure reason.

I resorted in the end to downloading the ISO from Microsoft and using that, this seemed to work flawlessly - even though it meant I had to redownload it all again.

From starting the ISO download I was up and running in about 2.5 hours, no other problems were encountered during the upgrade. 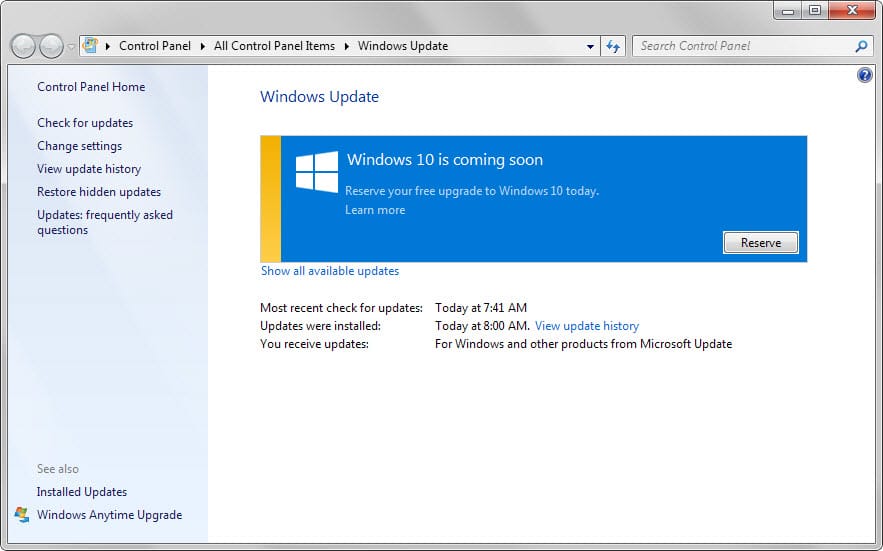 After it finally upgraded I was somewhat disapointed to see that my resolution was set to 800 X 400 and only one of my three monitors was detectable by the computer. However as expected forcing Windows Updates fixed the issue for me, within another 30 minutes my PC was up and running as normal.

I like it, not love it. To be honest - beyond a few things its really not that different in the way it works and is used than Windows 8.1. I spent a few hours going and looking and configuring basically everything in the OS, all the settings, looking at all the built in apps etc. No changes would be needed in my workflow to adapt to Windows 10, which is both good and bad.

What drove me insane the most in Windows 8.1 was how I would leave the Netflix Metro App running on one monitor while I worked on another. However any window which happened to popup on the Netflix monitor would stop the app from playing. You literally had to open the app back up and ask it to continue playing every time. Now with Windows 10 you can run them windowed like normal applications, so if something pops up over the top - it continue to play.

The searching in Windows 10 is very good, you can click start and type anything and it will try to give you results that are relevant (You could do this before but the experience is better and faster). I am finding this more intuitive and better performing than it was on Windows 8.1. Cortana is offering me "Google Now" like items in its feed which I also quite like, hopefully as Cortana gets better it will start being even more useful.

In the "This PC" section of Windows Explorer there is a new "Recent Files" section which works differently to the Operating systems that came before. I find this really useful now - it simply shows files you have interacted with recently, but does it well. This combined with the "Quick Access" section being easier to tag and untag folders from makes it so much easier to get to the files you want.

I love the Mail and Calendar apps in Windows 10. They have returned Google Sync for Calendars which is huge for me. I just generally love the way they work and look. I have since stopped using Outlook for my personal Mail. However don't try to add your work Exchange email because it wants to hand over control of your computer to your employer!

You expect a few basic games with Windows, but I really do like the Solitaire app which comes installed on Windows 10. Twin Peaks is my new favourite card game, because its easy for people who are rubbish at card games probably...

You can see a few changes in Microsofts thinking here, with a way to pay for "Premium" which seems to unlock adverts.

Windows 10 is performing great on my main PC, which I should expect as it has some horsepower. But I am under the perception that its working quicker than it was with 8.1 on various tasks.

These are great, all of the notifications that come up on Windows 10 now come up in the Action Centre. Its working similiarly to how it does on a phone now, facebook for example lets you know when somebody comments on your posts - you can click on the notification and it opens up the app.

Particularly of note - unlike Windows 8.1 if you miss a notification its not gone forever.

The Xbox app in general has seem some significant updates. My favaourite though is how you can now press Windows + G in any app and use it to record your screen and audio.

OK so I added this to the like section as well, but I was a bit disapointed in the way this worked. When trying to be conversational or asking anything "Off Script" it just offered to serve me web links from Bing. Disapointed, but this is understandably going to improve over time. Did spot a few bugs in the Cortana "Notebook".

When configuring your accounts to link to it, it seems to never login - the popups go away but nothing happens.

I dislike two things about this, firstly you are very limited by how you arrange your "Tiles". I tried to make it look a certain way and it kept me restricted to its grid in an annoying way, often forcing me to have to lay things out in a way that looks rubbish - for example: Not possible to have 2 large sized tiles next to each other in the same category, they can only be stacked vertically...

The start menu is also a bit glitchy, often trying to move my tiles around I had to try several times, it didn't seem to "grab" the tile many times, often also it would drop the tiles in ridiculous positions; forcing me to reshuffle it again.

Again something I like, but with things I don't like. Quite simply two things I want improved here.

1: Sound / Video playback on one desktop is stopped when you move to another. I want this to continue even on other desktops.

2: If you start an application (IE Visual Studio 2015) on Desktop 2, and then flick to Desktop 1. The application attaches to whichever desktop is open when its finished loading. Annoying.

Not a lot to say about the Personalisation options, there are less options available than there were in Windows 8.1 and I don't particularly like any of them. This revolves around the colours you can apply to the taskbar and start menu. They are all too bold or dark.

Again a quick one, with 3 monitors at least, this is impossible to hit. Its so small now that its easier to just press Windows + D.

I believe Windows 10 is a worthy upgrade, but do not attempt it yet if you are not very techy. You will likely run into the odd confusing thing and get stuck. However if you are able to overcome some small problems - Go for it.

Learn more about my personal project to shorten links in a safer and better way.

There are lots of applications out there for managing lists and tasks, but for my current personal project I wanted to try and build a better one. I am now launching the project, read on to learn more...

Looking for a new and exciting opportunity

My time at River has come to an end, so I am looking for a new role where I can make an impact and write some cool software. My ambition is to make peoples lives better through technology.

I recently wanted to have the ability to write Unit Tests for a personal project, I picked Effort.EF6 to help. This post goes through the setup for "Effort" and why you should choose it.

As somebody who develops quite a lot of websites, I find that most of the time I tend to use a lot of the same technologies and services. A lesser known service which I have come to love is called SendGrid, heres why I love it.

How to setup a Web App on Microsoft Azure

A how to guide to creating a Web App on Microsoft Azure, deploying it using Continuous Deployment and hooking it up to a database.

Welcome to my personal website. I am just in the process of relaunching it under my new technology called Portal CMS.

This article takes a look at options for setting up multiple email accounts for multiple custom domains.

Portal CMS is my latest technology, this article shows a video demonstration of the new technology in action.

A brief look at the upcoming Windows 10 release and a look at the new features in the update.

As somebody who develops quite a lot of websites, I find that most of the time I tend to use a lot of the same technologies and services. A lesser known service which I have come to love is called SendGrid, heres why I love it.

A brief look at the upcoming Windows 10 release and a look at the new features in the update.